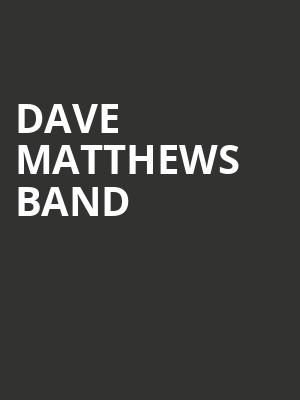 For better or for worse, the Dave Matthews Band has been a blockbuster live act for so long it's helped industrialize the lucrative jam-band scene.

Over the course of their twenty year plus career, the Dave Matthews Band have become one of the country's most reliable and biggest selling touring rock bands. Returning in 2018 to stages, Come Tomorrow was their first album since 2012s Away From The World. The band emerged from their hiatus back on top - Come Tomorrow landed straight in the number one spot on the Billboard charts!

In 2021 they'll be taking on North American in a massive Summer Tour, alongside a pledge to plant one million trees! Expect to hear some new material from their 2018 album, Come Tomorrow. Don't miss your chance to see the legends live as they light up various venues in North America with their extensive set of dates. Whilst the seven-piece will debut some new material, have no fear as the gents are sure to relive their classics like "What Would You Say", "Crash Into Me" and "The Space Between".

We thoroughly enjoyed the show. We have been listening to his new album... more

Am: “DMB was amazing FIDDLERS not so much”

Sound good to you? Share this page on social media and let your friends know about Dave Matthews Band at Van Andel Arena.